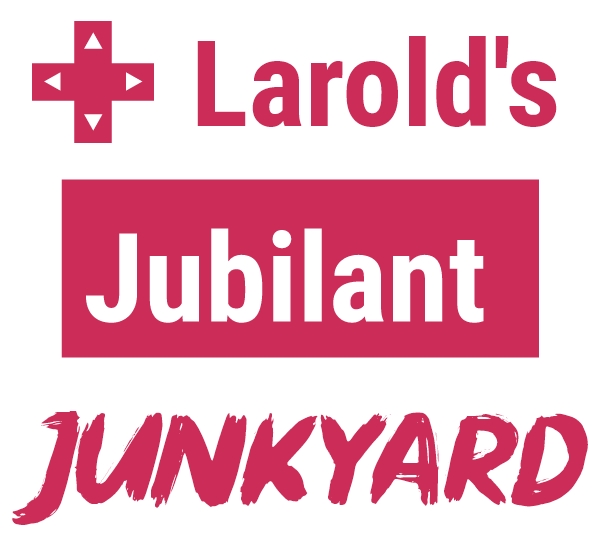 This is the second devlog for my 2021 Gameboy SHMUP. However, this is the first meaningful devlog. The previous devlog was sort of an introduction. It’s purpose was to explain some underlying topics. In Devlog #2 i’ll explain my current progress.

Pretty solid progress has been made on my Gameboy SHMUP. Player’s can select a level, after which, a story segment will be shown. In the level gameplay players can shoot multiple zig-zagging waves of enemies. Enemies when damaged will show multiple explosion effects, and score will increase. If a player collides with an enemy he/she will lose a life. Afterwards, Upon level completion, players are shown a stats and the next level unlocks.

The first element added for the game was obviously the player. The player is able to move in 4 directions via the Gameboy D-Pad. This is in every gameboy shmup. In addition, the player can also shoot bullets via the “A” button. This is super easy. My first ship was only 8×8. However, it was later resized to be 16×16.

The ship is designed in Gameboy Tile Designer. It supports drawing and exporting sprites/tiles for making gameboy games.

Next i designed the enemies and their ships. The enemy ships are also designed via Gameboy Tile Designer (GBTD). The enemy ships, like the player; started as 8×8 sprites. However, for the sake of fidelity i increased them to 16×16.

Every Gameboy shmup will have multiple enemies on screen. Thus arrays must be used to dynamically handle eachone. In addition, I created a basic Enemy struct in C for organization. Below is a snippet similar to what i did. The “onScreenEnemies” array is set with 30 elements. Because this array is not constant, it’s values can be changed and will be stored in RAM.

When spawning enemies, which “sprite” the enemy uses must be saved. This value is saved so it can be later updated. Additionally, enemies were given a random X value when spawning. Once logic is setup to spawn enemies, a basic for loop is used to update each enemy who’s “active” variable is set to 1. When an enemy is offscreen, it’s “active” value is set to 0 and it’s “sprite” is moved offscreen.

A Gameboy SHMUP wouldn’t be a SHMUP without bullets right? For bullets, I took a path similar to enemies. I allocated a bunch using a Bullet struct for organization:

I also designed 3 types of bullets in GBTD. Each has increasing strength. As the player get’s powerups his bullet sprites change to the next one. Each frame I update each “active” bullet, moving it up more until it’s offscreen. The bullet is then set to inactive.

After basic implementation, Enemies were given motion paths like you would see in other gameboy shmup games.

I implemented a linked list of “active” enemies & bullets. The “next” variable in each bullet/enemy struct points to the next “active” bullet/enemy. The reason for this is performance. This allows me to only update/check active items. However, it does add complexity to the code.

What’s Next for my SHMUP?

Bombs and bosses are still needed. Bombs will be rare, but when used will remove all on screen enemies. Bosses will be larger and shoot back at the player. Optimization for enemy/bullet collision tests is needed. Color sprites and Color backgrounds will be added soon. Physical cartridge tests will happen, when the neccesary hardware arrives.

Finally, NodeJS might be used to generate content. This is not necessary. However, it will ease the process of fleshing out actual final product elements. In addition, there is an idea in the back of my head NodeJS may help with.

Thanks for visiting Larold’s Jubilant Junkyard. 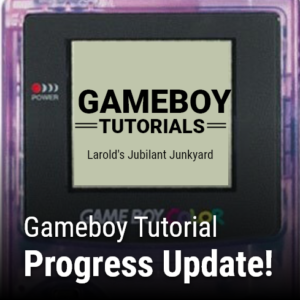 I’ve been focusing a lot of time recently on my Re-Creating popular Games for the Gameboy tutorial series. My most recent tutorial was How to

I recently decided to “keep it simple” for my 2021 Gameboy SHMUP. This comes after a long period of debugging. During this period, not much 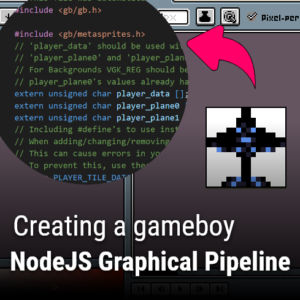 So in my last update on my 2021 Gameboy SHMUP, i was adding colors to the game. I eventually managed to complete the task and

For my 2021 Gameboy SHMUP, my next goal was working with GBDK 2020 Color. Currently, everything was in black n’ white. On some gameboy consoles 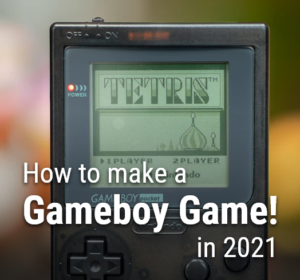 It was previously mentioned that my first project would be a Gameboy SHMUP. This is the first devlog update for that project. This project goes

Introducing the “How to make a Gameboy Game in 2021” series

In this series I’m going to show you how to make a Gameboy Game from scratch. Specifically, readers will learn how to make a basic

How to make Gameboy Games

How to play a sounds on Gameboy Hardware

How to handle Gameboy Joypad input

Drawing on the Background and Window Layers

Looking at a minimal GBDK 2020 Project

Sprites and Background Format in GBDK 2020

How to make Flappy Bird for the Nintendo Gameboy

How to make Pacman for Gameboy

How to make Tetris for the Nintendo Gameboy